Cadac kicks off the New Year, as it finished the old

US – Europe – Cadac finished off 2014 with a flurry of trade shows and demonstration events for its flagship CDC eight digital console throughout November and December, in partnership with its European distributors. For 2015 the company has already hit the demonstration trail running, at Teknikmesse i Operaen (Technology Exhibition at the Opera), at the Det Kongelige Teater Copenhagen, with Danish distributor STARBAEK Audiovisual Truss and Stage on 7 – 8 January, at Tour Link Conference in Palm Springs with Paul Morini from Cadac’s US office on 8 – 10 January, and at Queens University, Belfast, with PHG – Production House and Cadac’s UK sales manager Rob Hughes, in Northern Ireland on 13 – 15 January. 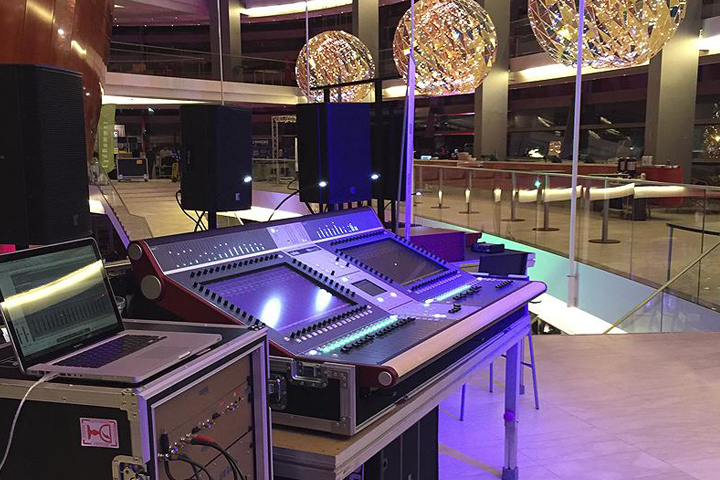 Cadac CDC eight at the Strøjer Collection, against a backdrop of a Duesenberg Model J, powered by a 6,900cc straight eight engine and capable of 119mph.

The trade show tour at the end of 2014 kicked off with Tonmeistertagung 2014 on 20 – 23 November in Cologne, where the CDC eight-32 and CDC eight-16 were centre stage on The Audio Specialists Germany’s stand. From Cologne it was on to Paris for JTSE audiolive 2014 with French distributor AUDIO2. With a CDC four on the exhibition stand and a CDC eight-32 in the auditorium for live demonstrations through an Outline line array. Next was BITAM (Broadcast IT Audio Media) 2014 in Madrid with Spanish distributor SOINUA.

December 2 – 3 was PLASA Focus Glasgow, with the CDC eight-16 again drawing the crowds on LMC Audio Systems’ stand. At the same time STARBAEK was demonstrating the CDC eight-32 and SAM (Sound Automation Manager) for CDC, to theatre and live sound professionals in Denmark, first at the Odense Theatre and then, the following day, at the Strøjer classic car collection.

A travel weary Richard ‘Fez’ Ferriday, Cadac Brand Development Manager, described the importance of taking the hands-on CDC eight mix experience to sound professionals at every opportunity: “It was an incredibly busy end of year for Cadac, and 2015 is set to be even better. CDC eight’s ease-of-use makes it really easy to get mix engineers up to speed very quickly – almost as fast as it takes them to appreciate the stunning phase-coherent audio quality – which makes hands-on demonstrations a very effective promotional tool. We’re looking forward to actively demonstrating those advantages to a lot more customers throughout 2015.”