Germany – Cadac Brand Development manager, Richard “Fez” Ferriday outlined a series of highly significant developments for the company in a keynote presentation to press and industry professionals at the Prolight+Sound exhibition.

Opening the event he stated, “On our booth you will already have noticed the biggest changes for Cadac in some time, with new people and more new products, including a high performance network infrastructure that makes our flagship CDC eight a real-world proposition.” 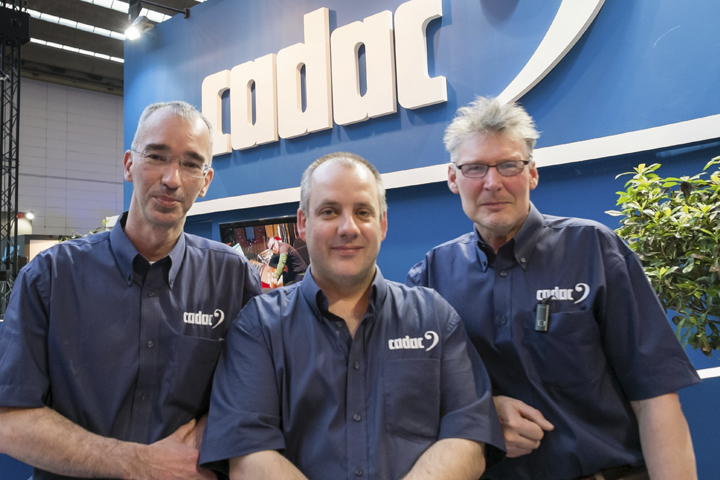 Introducing, publicly for the first time, his colleagues in the new marketing and brand development team – Marketing Manager James Godbehear and UK Sales Manager Rob Hughes – he announced that, with appointment of Hughes, the company was forming its own UK distribution operation, stating, “From the 1st of April Rob Hughes will oversee a select dealer network for the UK, out our a new marketing and demonstration facility in Stourport in Worcestershire. The move is in order to achieve closer contact with our customers in what is a key and strategically influential market. Further big developments in this area of operations will be announced very soon.”

On the product front, Ferriday focused on breakthrough advances in the ongoing CDC digital systems development program, with the launch of the MegaCOMMS System Network; an ‘end-to-end’ audio comms network with superior performance over greater distance than current standard protocols, but that also integrates with both MADI and Dante™ based network devices. Ferriday gave a detailed presentation of the two principal “infrastructure products” debuting at Prolight+Sound:

“The CDC MC Router, has 12 pairs of MC ports with a total capacity of 3072 channels of 96 kHz audio. Dual PSU’s, can be used to configure large-scale digital audio networks consisting of multiple I/O devices and multiple consoles. Configured with 7 pre-set routing maps, with custom maps available on request.

“The CDC MC MADI Bridge is a MegaCOMMS to MADI converter which enables the integration of any third party MADI hardware into a MC system. It features dual-redundant PSU’s, 48 and 96kHz MADI operation and two channels of MC MADI conversion.”

With the imminent launch of a CDC MC Dante™ Bridge, in the weeks following Prolight+Sound, Ferriday described these products as “now making the CDC eight a real world proposition”, exclaiming: “No other console manufacturer can offer a complete in-house solution on this scale. This takes our CDC digital systems to a whole different level, with one-stop solutions for any large scale multi-roomed installation or large scale, multi-artist live events, such as TV shows, awards ceremonies, festivals or mega tours.

“Multiple I/O stage boxes can be placed around a venue, feeding the FOH and monitor positions – and redundant consoles – and, via the CDC MC MADI Network Bridge, also feeding 128 channels to a broadcast truck, as well as to a DAW via the CDC MC Dante Bridge.”