Can 48 channels be controlled from the CDC four:m and CDC four?

When the stagebox is connected to the CDC four:m or a CDC four, two extra “layer” buttons are enabled allowing access to the extra channels.

Can 48 channels be controlled from the CDC four:m and CDC four?

To connect a CDC four:m / four to an iPad you will need TabMix installed on the iPad, which can be downloaded from the Apple App Store, a wireless router and an Ethernet cable.

You should now have the console connected to the iPad.

How do I connect my CDC four:m / four to an iPad running TabMix?

The CDC four and CDC four:m can have an additional 32 mic / line analogue inputs with the addition of a CDC I/O 3216 stagebox. The stagebox also allows the 16 line outputs to be on stage. To connect the stagebox to the CDC four or CDC four:m it must have a MegaCOMMS card fitted.

How do I expand the channel count on my CDC four:m or CDC four? 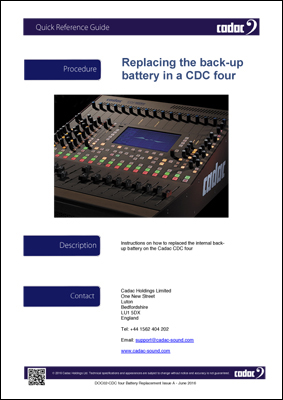 The linked document provides Instructions on how to replaced the internal back-up battery on the Cadac CDC four (a CDC four:m has a different procedure).

How do I replace the back-up battery in a CDC four?

If you are finding that your CDC four or CDC four:m is recalling odd audio parameters when you are booting the console up, it maybe a sign of the internal backup battery failing.

The audio parameters of the CDC four and CDC four:m are stored in RAM memory, which is powered by a 3V lithium battery when the mains power is switched off. After a couple of years the battery will be below its optimum charge and this may result in unexpected audio parameters being recalled by the console when powered up.

We would therefore recommend that you change this battery for a new one every 12 months.

Below are links to specific instructions for replacing the internal on both the CDC four and CDC four:m:

I am experiencing odd audio parameters being recalled by my CDC four / CDC four:m. What’s happening?

There is a small battery in the CDC four which supports the control parameters when mains power is removed, this battery needs replacing roughly every 12 months ( FAQ: How do I replace the back-up battery in a CDC four). When the battery is replaced it is necessary to “power cycle” the CDC four twice to re-establish a set of default parameters.

It has been noted that sometimes after doing this the CDC four will no longer communicate with a stage rack (this issue does not happen with the later CDC four:m version of the console). This communication issue is a result of the CDC four incorrectly resetting itself to use “Legacy MegaCOMMS mode” due to a memory corruption.

The quickest and easiest way to clear this problem is to do a firmware update, either via a Net Update or using a USB Memory Stick. This will clear the corruption of the Legacy parameter and restore communications to the stage rack.

If for any reason you do not want to do a firmware upgrade then another way to clear the problem would be:

You should now find that communications with the stage box will be restored.

I have changed the battery in my CDC four and now it won’t work with the stage rack. What’s wrong? 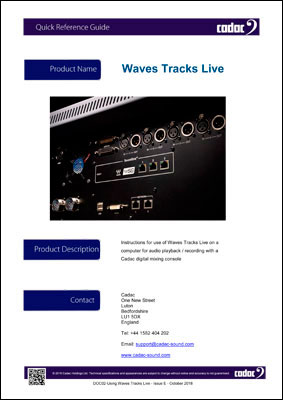 Using Waves Track Live on a PC or Mac

The login details for the customer repository are:
Login: customer
Password: cadac1968

What are the login details for the Cadac customer repository?

MegaCOMMS is a robust, TDM (time division multiplex) system. Control data is embedded within the data stream, so that no audio channels have to be sacrificed for this purpose. The high bandwidth available means that the current implementation of MegaCOMMS can carry 128 channels of 24-bit, 96 kHz audio, plus control data, plus clock, bi-directionally, up to 150 metres via a pair of RG6 coaxial cables.

What spec of coaxial cable should I use for MegaCOMMS?

The glowing connectors on the rear of the console and on the rack mount units are MegaCOMMS ports.

Why are there red and blue glowing coaxial connectors on the consoles and rack units?

RG6 is a very robust cable and the BNC connectors used are professional grade connectors and we are not limited to 100m runs of Ethernet technology – MegaCOMMS will easily run up to 150m on coaxial.

Why does Cadac use RG6 coaxial cables rather than Ethernet?

No – unless the cables you are using are RG6 3G 75 Ohm 18 AWG solid bare copper, super high-resolution coaxial.

MegaCOMMS requires a cable that is capable of handling over 4 times the data needed for MADI.